“With his hearty sound and bristling ideas, O’Connor can bowl over even a jaded follower of post-bop jazz.”
– Neil Tesser, Author, The Playboy Guide to Jazz

“A great new cd, it does not contain a bad cut. Already one of my favorites for 2003!”
– Bill White, WWOZ, New Orleans

“O’Connor’s tone is warm and fat… unison melody lines are outstanding… the compositions on the album are something else.”
– Jazz Improv Magazine

“*** (3 stars) This is a bright and promising debut from the saxophonist, who now bases himself in Chicago. His opening number ‘The Beast’ has both excitement and authority, and the title track explores some interesting rhythmic possibilities. O’Connor has assembled a strong roster of players and uses them cleverly to maximize his possibilities on this first-shot record, where it’s forgivable to take on too much and attempt to show off every wrinkle of your playing style. The ballads and standard tunes are less beguiling than the originals, though he gets off a fine version of ‘It’s Easy to Remember’ and then rounds off a very pleasant set with a brisk read of Jackie
McLean’s ‘Little Melonae’.
– The Penguin Guide to Jazz on cd Seventh Edition by Richard Cook and Brian Morton

“Tenor saxophonist Mark O’Connor (not to be confused with the veteran violinist, guitarist and mandolin player with the same name) should surprise many jazz fans with his striking debut as a leader. Utilizing a rotating cast of talented musicians in either quintet or quartet settings; the Chicago-based musician’s confident and full-bodied sound belies his youth on this post-bop oriented date. Six of the ten selections are his own, especially the challenging, well-named opener (‘The Beast’) and the free-spirited mixed meter ‘Mirage.’ Neither is he a slouch as an interpreter of ballads, which include two works by the matchless team of Rodgers & Hart: a loping treatment of ‘With a Song in My Heart’ and a touching take of ‘It’s Easy to Remember.’ Finally, his driving rendition of Jackie McLean’s ‘Little Melonae’ wraps the CD with a flourish.”
– All Music Guide article by Ken Dryden 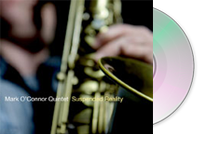